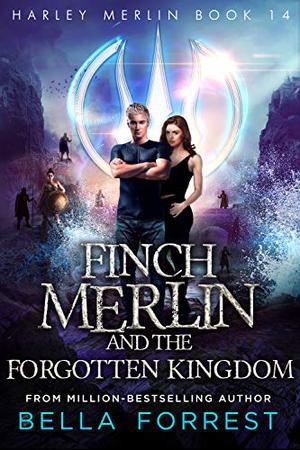 Finch is in deep, with no surface in sight.

He hadn’t expected a welcoming party when they whirlpooled into Atlantis—although “welcoming” isn’t exactly the right word. More like “mildly hostile.”

As descendants of the powerful Primus Anglicus, the Atlanteans are not to be trifled with. But Erebus isn’t leaving until he gets what he wants—and neither is Davin. Caught in the midst of a political battle royale, Finch can only ride out the waves.

And he knows he’ll be lucky to escape this underwater prison without leaving anyone behind.

For Melody, being trapped in an ancient, unfamiliar city is a dream come true. She hungers to fill the gaps in her knowledge, and Atlantis is a delicious buffet, from love potions and Death Day celebrations to beautiful and dangerous creatures.

Navigating this new world isn’t so scary with her trusty bodyguard by her side, though she must protect her own heart. History has shown that the Librarian isn’t supposed to fall in love… but what if it’s already too late?

Similar books to 'Finch Merlin and the Forgotten Kingdom'

More books like 'Finch Merlin and the Forgotten Kingdom'   ❯

All books by Bella Forrest  ❯

Buy 'Finch Merlin and the Forgotten Kingdom' from the following stores: