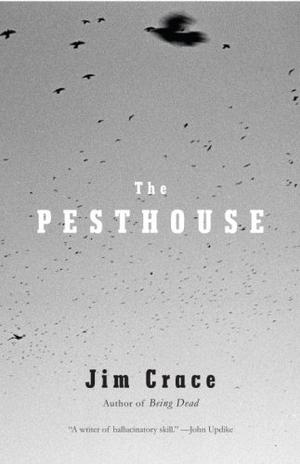 Jim Crace is a writer of spectacular originality and a command of language that moves a reader effortlessly into the world of his imagination. In The Pesthouse he imagines an America of the future where a man and a woman trek across a devastated and dangerous landscape, finding strength in each other and an unexpected love.

Once the safest, most prosperous place on earth, the United States is now a lawless, scantly populated wasteland. The machines have stopped. The government has collapsed. Farmlands lie fallow and the soil is contaminated by toxins. Across the country, families have packed up their belongings to travel eastward toward the one hope left: passage on a ship to Europe.

Franklin Lopez and his brother, Jackson, are only days away from the ocean when Franklin, nearly crippled by an inflamed knee, is forced to stop. In the woods near his temporary refuge, Franklin comes upon an isolated stone building. Inside he finds Margaret, a woman with a deadly infection and confined to the Pesthouse to sweat out her fever. Tentatively, the two join forces and make their way through the ruins of old America. Confronted by bandits rounding up men for slavery, finding refuge in the Ark, a religious community that makes bizarre demands on those they shelter, Franklin and Margaret find their wariness of each other replaced by deep trust and an intimacy neither one has ever experienced before.

The Pesthouse is Jim Crace’s most compelling novel to date. Rich in its understanding of America’s history and ethos, it is a paean to the human spirit.
more
Bookmark Rate Book
Amazon Other stores
As an Amazon Associate bookstream.io earns from qualifying purchases

Similar books to 'The Pesthouse'

Buy 'The Pesthouse' from the following stores: