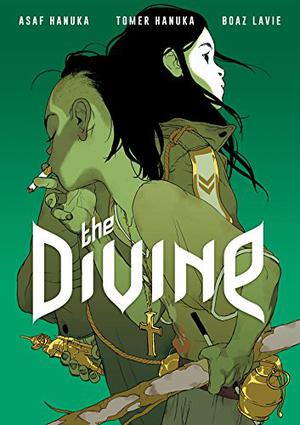 Mark's out of the military, these days, with his boring, safe civilian job doing explosives consulting. But you never really get away from war. So it feels inevitable when his old army buddy Jason comes calling, with a lucrative military contract for a mining job in an obscure South-East Asian country called Quanlom. They'll have to operate under the radar--Quanlom is being torn apart by civil war, and the US military isn't strictly supposed to be there.

From world-renowned artists Asaf and Tomer Hanuka (twins, whose magic powers are strictly confined to pen and paper) and Boaz Lavie, The Divine is a fast-paced, brutal, and breathlessly beautiful portrait of a world where ancient powers vie with modern warfare and nobody escapes unscathed.
more
Bookmark Rate Book
Amazon Other stores
As an Amazon Associate bookstream.io earns from qualifying purchases

Similar books to 'The Divine'

Buy 'The Divine' from the following stores: