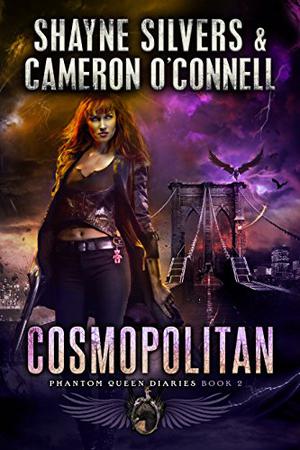 It’s time for Quinn MacKenna to pay off a debt – to Nate Temple. And New York City will never be the same…

Quinn MacKenna is a black-magic arms dealer from Boston, but her world drastically changed after accidentally robbing Nate Temple a few weeks ago.

Primarily, that her absolution might have come with some strings attached… Like a trip to the Big Apple to steal a mysterious and deadly artifact for Grimm Tech – strictly off the books.

But it doesn't take her long to learn that she isn't the only one after the magical whatsit, and that the monsters in New York play for keeps. Key word being play. Because they've all heard about the little ginger from Boston, and want to see if she tastes as sweet as she looks...

And that's before she learns that Heaven and Hell have stepped into the game...

Maybe it’s time Quinn finds some allies from St. Louis. Or the Brooklyn Bridge may just become a memory… Along with Quinn.

The newest antihero in the Worldwide Bestselling Temple Verse by Shayne Silvers. Join Cameron O’Connell and Shayne at the literary bar to sip a dirty cocktail of feisty Irish brogue – with an unhealthy splash of carnage – TODAY!

If you like KF Breene, Shannon Mayer, CN Crawford, Ilona Andrews, or Patricia Briggs, you will LOVE the SECOND installment of the Phantom Queen Diaries.

The 'The Phantom Queen Diaries' series

All books by Shayne Silvers  ❯

Buy 'Cosmopolitan' from the following stores: