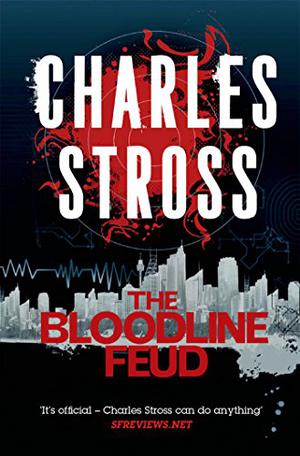 The Bloodline Feud (The Merchant Princes #1-2)

The Bloodline Feud: an omnibus edition of the first two novels in Charles Stross's The Merchant Princes series

The six families of the Clan rule the kingdom of Gruinmarkt from behind the scenes. They are a mixture of nobility and criminal conspirators whose power to walk between their world and ours makes them rich in both.

Miriam, a hip tech journalist from Boston, discovers her alternate-world relatives with explosive results that shake three worlds. Now, as the prodigal Countess Helge Thorold-Hjorth, she finds herself ensnared in schemes and plots centuries in the making. She is surrounded by unlikely allies, lethal contraband, and—most dangerous of all—her family.

To avoid a slippery slope down to an unmarked grave, Miriam must build a power base of her own—with unexpected consequences for three different time lines, including the quasi-Victorian one exploited by the hidden family.
more
Bookmark Rate Book
Amazon Other stores
As an Amazon Associate bookstream.io earns from qualifying purchases

The 'The Merchant Princes' series

Similar books to 'The Bloodline Feud'

All books by Charles Stross  ❯

Buy 'The Bloodline Feud' from the following stores: