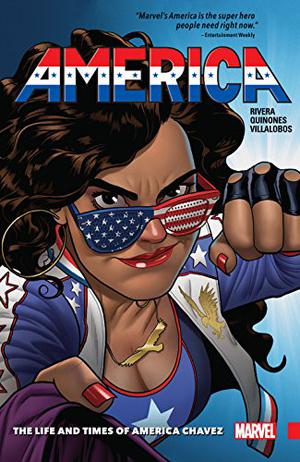 At last! Everyone's favorite no-nonsense powerhouse, America Chavez, gets her own series! Critically acclaimed young-adult novelist Gabby Rivera and all-star artist Joe Quinones unite to shine a solo spotlight on America's high-octane and hard-hitting adventures! She was a Young Avenger. She leads the Ultimates. And now she officially claims her place as the preeminent butt-kicker of the entire Marvel Universe! But what's a super-powered teenager to do when she's looking for a little personal fulfi llment? She goes to college! America just has to stop an interdimensional monster or two first and shut down a pesky alien cult that's begun worshipping her exploits before work can begin. Then she can get on with her first assignment: a field trip to the front lines of World War II - with Captain America as her wingman!

Similar books to 'America, Vol. 1: The Life and Times of America Chavez'

More books like 'America, Vol. 1: The Life and Times of America Chavez'   ❯

Buy 'America, Vol. 1: The Life and Times of America Chavez' from the following stores: