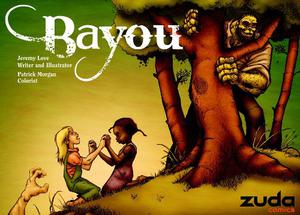 The first title from the original webcomics imprint of DC Comics!

South of the Mason-Dixon Line lies a strange land of gods and monsters; a world parallel to our own, born from centuries of slavery, civil war, and hate.

Lee Wagstaff is the daughter of a black sharecropper in the depression-era town of Charon, Mississippi. When Lily Westmoreland, her white playmate, is snatched by agents of an evil creature known as Bog, Lee's father is accused of kidnapping. Lee's only hope is to follow Lily's trail into this fantastic and frightening alternate world. Along the way she enlists the help of a benevolent, blues singing, swamp monster called Bayou. Together, Lee and Bayou trek across a hauntingly familiar Southern Neverland, confronting creatures both benign and malevolent, in an effort to rescue Lily and save Lee's father from being lynched.

All books by Jeremy Love  ❯