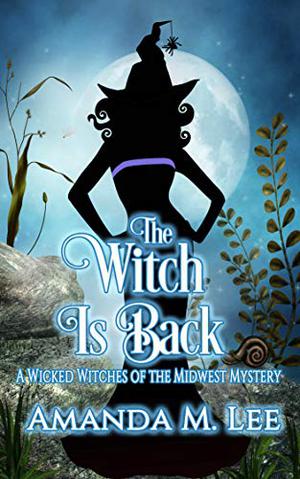 The Witch is Back (Wicked Witches of the Midwest #17)

Bay Winchester is living the high life. She’s engaged, owns her own business, and is undergoing a magical transformation, complete with growing powers at every turn. All that changes when a local teenager goes missing at a festival and nobody knows who took her.
The girl’s friends saw the abduction but the description they provide doesn’t match anybody in town. The only other witness is Marcus, her cousin Thistle’s boyfriend, and he was seriously injured in the attack and can’t provide additional information.
Bay is determined to solve the case, although she’s not sure where to look. On top of that, her normal partner in crime is otherwise engaged, which means her mother has decided to tag along for the ride.
Bay is the sort of witch who is willing to put herself on the line to save those who need saving. Unfortunately, this time around, the answers she finds only lead to more questions. On top of that, her great-aunt Willa and cousin Rosemary have arrived in town out of nowhere and they seem to be harboring their own secrets, and it’s something that could change the entire trajectory of Bay’s life.
The Winchesters are loyal, and it’s going to take all of them working together to solve this one. It seems new magic is afoot, and whoever is wielding it is deadly.
Magic, mystery and mayhem are about to collide. Batten down the hatches. The Winchesters are about to take you on a wild ride.
more
Bookmark Rate Book
Amazon Other stores
As an Amazon Associate bookstream.io earns from qualifying purchases

Similar books to 'The Witch is Back'

Buy 'The Witch is Back' from the following stores: