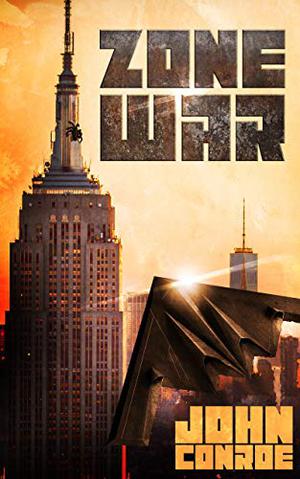 Book 1 of the Zone War series.

A few short years from now, eco-terrorists unleash the worst attack the world has ever seen. Over 25,000 autonomous combat drones are released in Manhattan from the hold of a ship. Hundreds of thousands are dead, and the entire island is evacuated and quarantined in just a few days’ time.

Ten years later, Manhattan is still empty of humans, with the exception of the salvage specialists of the most watched reality show in history: Zone War. Produced live and unedited, the show follows five teams of armored vehicle specialists who brave the active drones to recover lost riches and collect bounties on dead ones. Ram it, slam it, grab the goods and bull your way back out. And don’t break down, because no one will be coming to your aid. Armored entry is the way to go… Unless…

Meet Ajaya “AJ” Gurung, sniper’s son, drone technician and Zone infiltrator. Following his father’s footsteps while forging ahead in ways all his own, AJ has the potential to be the most successful recovery specialist of all time. The drones are changing, the rules have been thrown out and nothing about the Zone is what it seems. Adapt or die.
more
Bookmark Rate Book
Amazon Other stores
As an Amazon Associate bookstream.io earns from qualifying purchases

All books by John Conroe  ❯