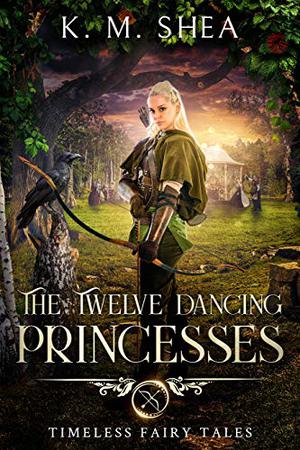 Quinn is a loyal soldier of Farset, willing to risk her life on behalf of her country and squad. So, when a fellow soldier volunteers for a dangerous mission, Quinn joins him. Their assignment is to investigate the nightly disappearance of the twelve royal princesses, a mystery none have solved as those who attempt it vanish. But when she follows the girls, Quinn uncovers the truth: the princesses are cursed, and they’re not alone.

Emerys, the sarcastic and brash King of the Elves, has lost all hope. His people have been prisoners in their own forest for years, and night after night an unbreakable curse forces them to dance and celebrate against their will. But everything changes when Quinn saves Emerys’ life and the pair form an unlikely friendship. Together, they just might be able to free the princesses and the elves.

However, those who cursed the elves will do anything to keep them restrained. And if Quinn breaks the spell, she may pay for it with her life.

Will she succeed? Or will Emerys and the elves be lost…forever?

THE TWELVE DANCING PRINCESSES is a fairy tale retelling and the tenth book of the TIMELESS FAIRY TALES series. Filled with magic, unbreakable curses, elves, and witty banter, it can be enjoyed as an individual stand-alone book, but will be most enjoyable if read after other books from the series.
more
Bookmark Rate Book
Amazon Other stores
As an Amazon Associate bookstream.io earns from qualifying purchases

Buy 'The Twelve Dancing Princesses' from the following stores: