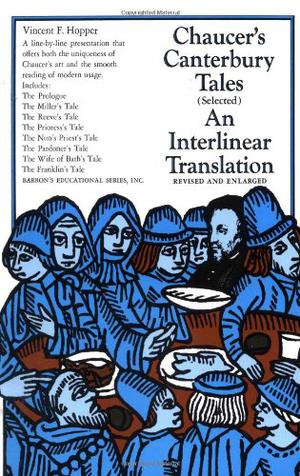 Begun soon after 1386 and written during several years that followed, Geoffrey Chaucer’s great narrative poem The Canterbury Tales presents a richly detailed, highly entertaining, and sometimes bawdy picture of English society in the fourteenth century. Rich with humorous insights into the many foibles of humanity, this poem is considered by most literary critics and scholars to be the first great example of literary art written in vernacular English. Its narrative opens as a party of 30 men and women from various walks of life gather at the Tabard Inn in London, from where they set out on a holy pilgrimage to Canterbury and its shrine dedicated to Thomas Ã Becket. As they travel, each person has a story to tell.

—and then goes on to present
The Miller’s Tale The Reeve’s Tale The Prioress’s Tale The Nun’s Priest’s Tale The Pardoner’s Tale The Wife of Bath’s Tale The Franklin’s Tale . . . and more.
This fine volume also includes an enlightening introductory essay on Chaucer’s art, with Professor Hopper’s commentary on England as it existed in the fourteenth century. He concludes with a short list of recommended reading on Chaucer’s time and his art.
more
Bookmark Rate Book
Amazon Other stores
As an Amazon Associate bookstream.io earns from qualifying purchases